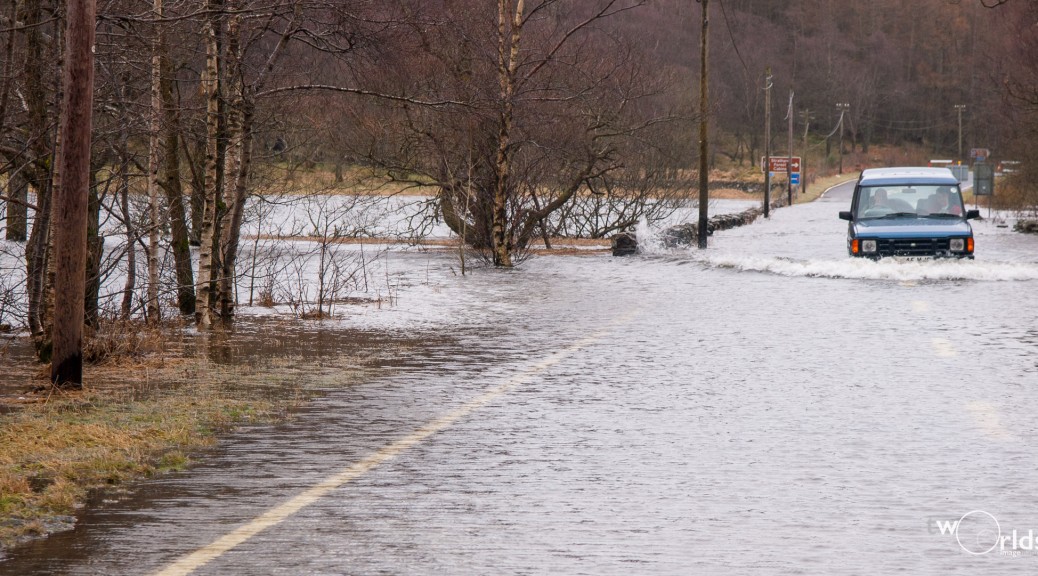 It’s been a tad damp of late. That’s d-a-m-p, to the point of the loch rising a metre overnight, the field at the bridge vanishing completely and both our drive and the road to the village being overtopped by the flood waters. And this on the weekend that Gill’s nephew and wife are coming up from the deep South to visit. “No problem”, we’d said, “We’re just an hour-and-a-bit from Edinburgh, so take a wander into Wonderland”.

First mistake: they believe us, the fools, and set forth. Next thing is a phone call: “Er, we’ve just got onto the M9 and the signs are telling us that the A84 is closed”. So it’s off to the Traffic Scotland web site. Second mistake: we believe it when it says that the closure is between Callander and Kilmahog. We smugly direct our visitors around the back road to avoid the putative flood. Except of course that it isn’t there: the next phone call is to say that the notorious Anie straight is under a metre or two of Highland meltwater and they’ve had to turn back to Callander. As my own car is roughly arse-high to a grasshopper, there’s no help to be had there.

Now at this point there’s an admission to be made: as someone who appreciates economy, elegance and efficiency in engineering and who has for years suffered from South-East England’s plague of urban and school-run 4x4s, I hate the bloody things as planet-mugging smugmobiles for the terminally selfish. However, I do acknowledge their utility in places that genuinely need such things, from the ubiquitous white of UN and NGO Land Cruisers throughout Africa to the Subarus of Yorkshire farmers and, as it turns out, for getting around and about in a typical Highland winter.

So I swallow my principles and we drive as far as the local pub, borrow the obliging owners’ 4×4 and head off on our rescue mission, having worked out how to drive the beast using those controls that haven’t entirely been eaten by Jess, the plastivore dog. The water on the Anie straight is deep: Gill leans out of the passenger window to call out water depth, both of us however failing to notice that our bow wave is sloshing in through the front of the window, until an inevitable dampness in her wellies reveals the cold, soggy truth.

But we make it through, pick up our guests and make the return trip without further incident. The following day we make the reverse journey, to find that the floods have cleared and that normal service is resumed. We also find that a dozen or so flood warning signs have been freshly placed on the clear, drying road. As ever, impeccable logic from the local council – Me: “You’ve put a job lot of flood signs out after the floods have cleared”. Them: “Yes”. Me: “Am I missing something here – why put them out today rather than yesterday?”. Them: “Oh, we couldn’t put them out yesterday, the road was flooded…”.