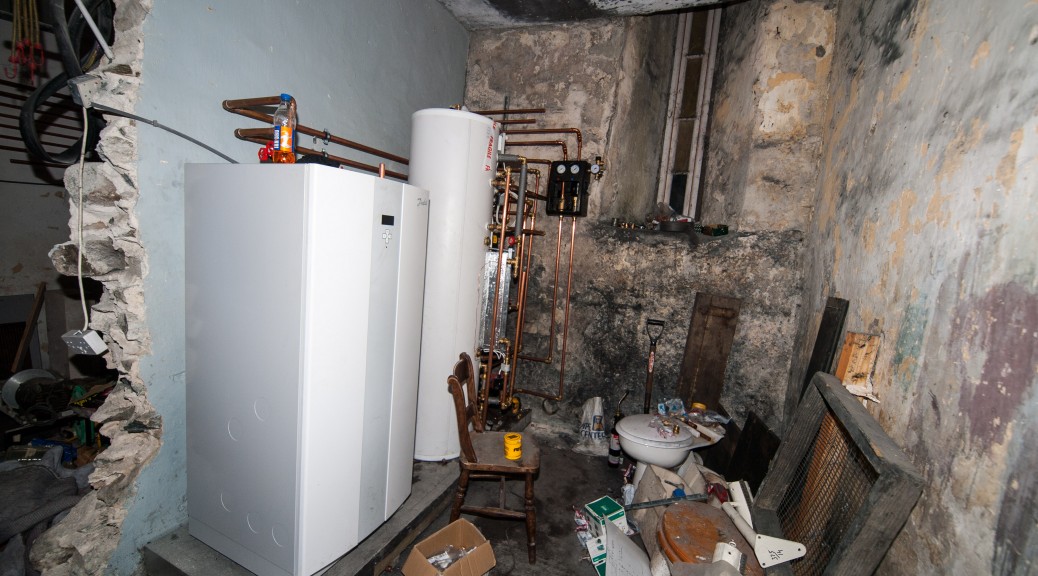 Our renewable energy (lack of) saga drags on. Using our own records and technical audits from both BRE UK and a new supplier recommended by Danfoss, we’ve been able to demonstrate that our original renewable systems supplier, MMAXX Ltd, and their managing director, Neil McFarlane, had neither the competence to take on the work in the first place nor the integrity to admit it and either turn down the project or bring in people who did know what they were doing. That’s led to more than a year of non-functioning systems, damage to our property and a system that has so far provided neither the heat nor hot water specified and required. It’s also failing to deliver the promised savings or environmental benefits.

We’d selected MMAXX Ltd on the basis of their being accredited under both of the UK government’s renewable energy schemes, MCS – the Microgeneration Certification Scheme (technical and for RHI tariff registration) and REAL for contractual obligations. Big mistake – I’d rather naively assumed that an officially required certification would be backed by robust review and enforcement. Not so.

The problem is persuading either of those bodies to take action: REAL Assurance have simply failed to take any action whatsoever in what should have been a very clear case and are in fact demonstrably in breach of their own charter – I spoke at one point to their CEO, Virginia Graham, and was highly unimpressed – from my perspective she spent the entire call trying to pass the buck, contradicting herself and finally promising to “phone somebody…” Nothing has been heard from them in the months since. I’ve complained to the OFT about REAL Assurance’s behaviour. The OFT has responded but basically said, “what do you expect us to do?”. Well, Office of Fair Trading, the clue might just be in your title…

BRE Global, the administrators of the MCS scheme, have been nearly as bad. After months spent dealing with one Nick Green, resulting in no action whatsoever and an apparent determination to take none, I then escalated my complaint to their Compliance Manager, Stephen Phillips, who has at least proven responsive and communicative. In the following months, we did get a thorough audit of the system (against the requirements of the MCS scheme, which didn’t address all the issues by any means) by inspectors from BRE UK (who are contracted by BRE Global to carry out technical inspections). That audit backed our assessment and experience of all our key problems. However, MMAXX themselves have done everything they can throughout the process to ignore, obfuscate and misdirect, even making allegations of bias by the BRE inspectors in our favour. As things now stand, there is no reason for BRE not to withdraw their MCS accreditation – that doesn’t actually help us much, other than as an extra box to tick in a court of law, but I don’t want other innocent parties suffering from the actions of this company.

However, every single time that MMAXX fails to respond or comes back with yet another piece of egregious stupidity, BRE has simply extended the deadlines for response. We’re now a year on from starting the complaint process, itself only taken after four months of failing to get MMAXX to respond to our problems and concerns, and are no better off than when we started.

At the time of writing this, of our three renewable energy sub-systems, two (Alutech solar thermal panels and a wood-burning stove/back boiler) don’t work at all and the third, our Danfoss ground source heat pump has been installed fundamentally incorrectly, resulting in it running in the least efficient way possible and placing the maximum stress on its components.

It appears that MMAXX did not carry out accurate heat loss calculations for our property (and such calculations as they did provide contained basic errors), did not design the system (they have consistently failed to produce any design or operational documents for the system, despite repeated requests from ourselves and BRE), were incapable of properly installing and configuring what they did provide and even failed to ensure that our borehole was drilled deep enough for our property’s needs. Throughout the process, there has been no on-site project management, no oversight of their individual trades and it’s been painfully obvious whenever they have been on site that everything was being done by guesswork, not design.

Our only recourse now is court action against MMAXX, and a possible application for a judicial review of BRE and REAL Assurance’s stewardship of their respective schemes, given how poorly both have behaved. More cost, time and stress – we’re in no doubt that we’ll win, given the overwhelming evidence, but that’s not the same thing as recovering the costs of rectification and of the legal action itself.

The big lesson however for anyone about to invest in a renewable energy plant, even the most basic systems, not just a highly integrated system such as ours, is that, if it all goes pear-shaped and your supplier, like ours, turns out to be demonstrably incompetent, dishonest or otherwise incapable, you will get NO help whatsoever from the official MCS and REAL certification schemes – they are effectively Charters for Cowboys*. And such is the state of renewable energy in the UK today.

* With apologies to the men and women of that hard-working profession.