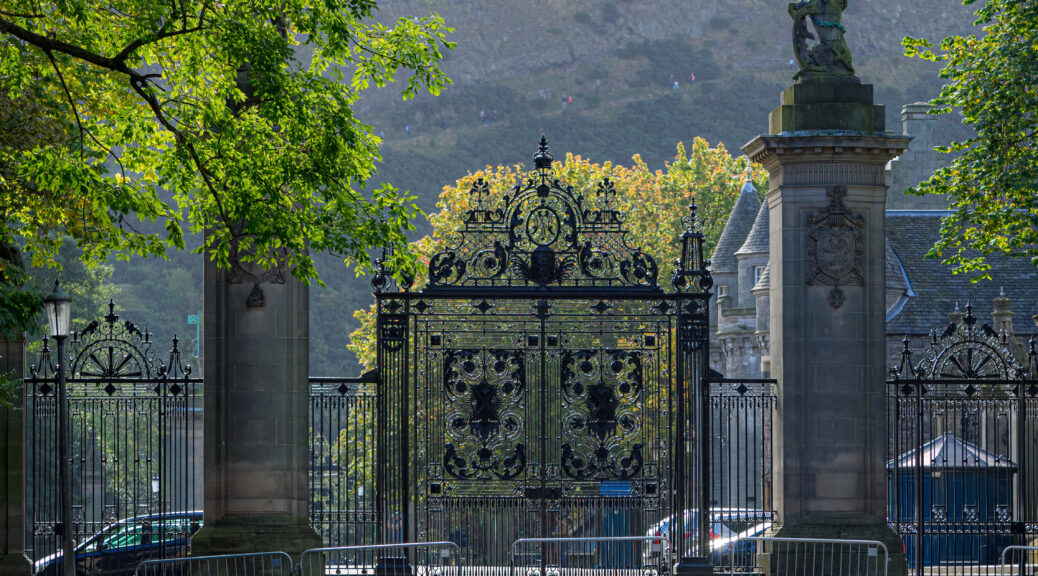 With the bowing out of the second Elizabethan Age, It probably won’t take much hindsight to see Elizabeth II as possibly the last unifying factor in the life of the rather nebulous entity we call the United Kingdom. Despite her accident of birth, she managed to embody a clear commitment to public service, to duty, decency and integrity, all carried out with unfailing good humour.

She also made a very good double act with her mouthy sidekick, Philip – grace plus a leavening of uncouth. In passing though, I do wonder how much of his ‘on tour’ persona was calculated to counterpoint hers – having been in a couple of meetings he chaired, I’d been most impressed with his deftness of touch and management of complex issues.

Back to the main act though: Liz will definitely be missed across Scotland, where her evident love for the place endeared her across much of the political spectrum. It often appeared that she’d have been happier as the Queen of a progressive Scotland rather than the monarch of an increasingly introspective and regressive decaying power with delusions of exceptionalism.

So, what next, and how will the Carolean Age (which I’ll grant sounds better than the “Age of Charlie’s”) impact the prospective dissolution of of the Union?

Firstly, there’s Charles himself, who appears as a slightly different kettle of privilege. Whilst his relatively outspoken views whilst Prince of Wales on the environment and climate change are most welcome, he may feel that, as monarch, he has to align himself more with the current political establishment and its largely denialist idiocy. If so, that would be a great shame, and would certainly skew his ratings further away from the younger and less reactionary citizenry.

On the credit side, his own love for Scotland is manifest, which will definitely improve his public perception here, but he is also seen to be more detached and to lack that vital empathy with the wider population that appeared to come so naturally to his mother.  Nor is his treatment of Diana forgotten, but that of course isn’t specific to Scotland. Overall, I think that Scottish public perception of him is less enthusiastic and that he’ll be less of a unifying influence. He probably isn’t going to drive people to vote for Scottish independence, but I doubt that he’ll persuade many to stay with the Union for the sake of continuity of the monarchy.

I do though carry a lingering regard for the guy, ever since he and Phil pulled up and helped dig a couple of friends out of a snowdrift in a blizzard on Deeside, many years ago.

Then there’s William. Now here’s someone who appears to have inherited his father’s stuffiness, allied with a charisectomy. Whatever his personal merits, he has metamorphosed from a motorcycling dude Prince into the epitome of the Establishment stuffed shirt. This is not an attribute that plays well in Scotland, despite the lingering natural sympathy and outrage we mostly have over the death of his mother and the consequent trauma to him and his brother. I don’t think we have to wait for King William the Whateverth for him to be an active turnoff for the Scottish population –  his mere presence in the wings will reduce the role of monarchy as a unifying influence for the UK.

Ironically, given the way the English establishment and media have treated him and Meghan (or possibly because of it), Harry may be the one member of the immediate family who could be seen as carrying even a small flag of relevance in Scotland. And of course he’s the least likely to become a monarch, even in a more Scandi-style role where ceremonial duties are accompanied by a decent house, a small stipend and a company bicycle.

I do think that this will be seen as, if not a turning point in the history of the UK, then a step along the way to change: I can see – even if I can’t predict the when – a time, bar fundamental and fundamentally improbable reforms to the constitution and governance of the Union, Scotland, Northern Ireland and (possibly) Wales go their own way into a European and internationalist future, whilst England continues its slide into resentful and self-impoverishing global irrelevance. Even a Labour landslide in England in the next election (we already have an SNP landslide in Scotland) won’t stop that trajectory, as long as they fail to introduce the constitutional reforms that might turn the UK into an entity relevant to both its countries and to modern democracy. In that process, the future presence, absence or persona of a monarch is unlikely to play the defining role in national identity that Elizabeth did and, as such, is just one more incremental untethering of the bonds of Scotland to the UK, the greatest impetus for which is however provided by the behaviour of the Westminster Junta.

Finally, an author’s disclaimer: in my life, I’ve swung from adolescent Royalism to a largely cheerful agnosticism about the Royal family, then, in recent years, a multi-factored bodyswerve towards pragmatic Republicanism. That said, I had a deal of respect and liking for Her Maj. That’s partly from respect for how she performed a role and partly personal resonance, as she’s exactly the same age and aspect as my mother – in fact, for most of her life, my mum could have been Liz’s stunt double. So it’s perhaps fitting that the last word goes to my mother: her text yesterday evening simply said, “I win”.