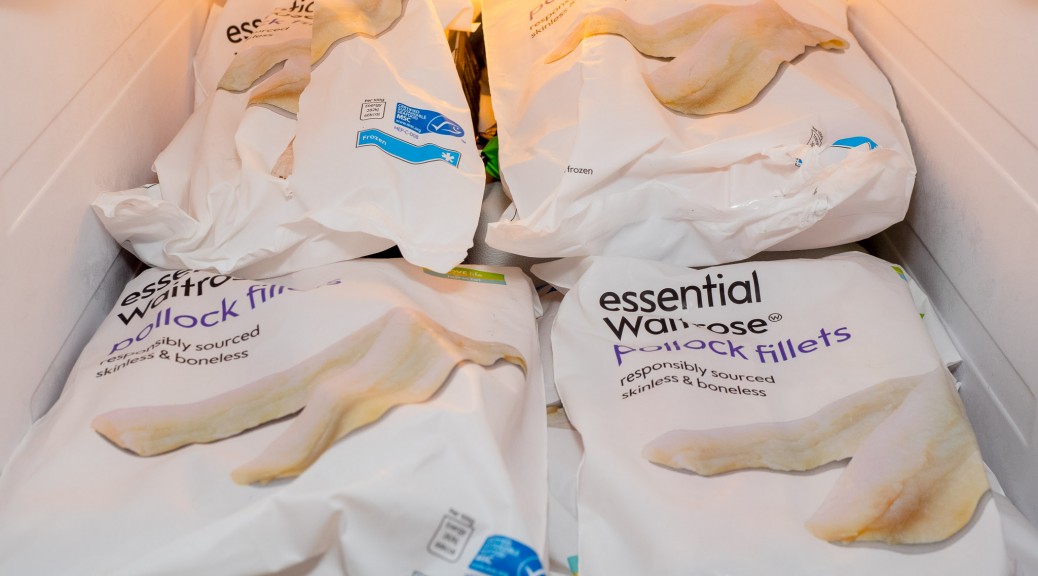 A parable for our times.

I have been rumbled: as of yesterday, the Great Waitrose Frozen Pollock Scam is, officially, over.

It all started out – as such things often do – with the opportunity to get something for nothing, or at least for very little.

Back in the day, life was simple: in our rural economy, the cats would occasionally get a treat, a pack of frozen pollock fillets from Waitrose, at £2.99 a pack. And, whilst that remained a luxury, all was well.

Then one day, as I picked up a pack and waved the magic scanner at it, the device pinged with that happy “Special Offer” ping and displayed the enigmatic message, “5 for6” (sic). Five for the price of six? Perhaps not, even in Waitrose. A typo of six for the price of five? Possibly. So I scanned four more. It pinged again: “Total saving: £8.95”. So it was five for £6. I then felt the joy that only a Scotsman (or possibly a Greek) confronted with an improbably good deal can feel, and kept on scanning.

In the excitement of the moment, I did forget that I was on my motorcycle. I then had the interesting job of secreting ten bags of frozen pollock about my person for the thirty mile journey home. So I probably should net off the cost of frostbite treatment against the whole deal.

The next time I was also on the bike, but took the panniers. The BIG panniers. That worked, although the suspension took a bit of a hammering. Thereafter, we used our 4×4, lurching back from Stirling laden with pollock, with ice riming the inside of the windows.

We calmed down a little after that, not wishing to deplete the ecosystem beyond the point of sustainability. Or at least the point at which a Waitrose wonk would stare at a red flashing line on a screen and think, “Wait a minute…”. We also developed an in-depth knowledge of Waitrose’ restocking cycle.

But then of course the unintended consequences kicked in: with fish now being cheaper than cat food, they got more of it. This fostered a sense of entitlement, with the ungrateful furry sods expecting it on a daily basis and turning their snouts up at anything they considered beneath them.

And then we told the neighbours. After that, our freezer was full, the village’s freezers were full and a whole secondary economy developed. Services were traded for pollock, which wasn’t so bad: the problem came when subsidiary markets developed and the trading of pollock futures became the in thing. By the time derivative and piscine credit swap markets had evolved, much of the local economy was based on the notional availability of artificially cheap Pollack and egregious manipulation of the TIVPOR (The Trossachs Inter-Village Pollock Offer Rate). In retrospect, it was probably as well that our bid to host the 2026 World Cup never got off the ground, after we realised that even our new-found fishy wealth wasn’t sufficient to bribe FIFA.

And then it all came to a crashing halt. Yesterday, we limbered up for another raid on the fish freezer, waved the scanner at it and… …nothing. Merely a simple line stating that we could have pollock at £2.99, or go hang. We bought a couple, more out of reflex than anything else, and meandered disconsolately home.

I can’t be the only cat ownee who spotted all of this and presumed it to be a mistake. So, somewhere in Waitrose, there will have been a minion monitoring sales patterns and registering a nationwide spike in frozen pollock sales. Another minion, responsible for looking at revenue, would have been seeing an unexplained fall in frozen fish profits. It’s then taken some time for the two of them to get together and wonder just what was going on. That is however a lot better than the decade it took the Eurozone to do the same thing, even when the rest of us knew it from the start. Perhaps Waitrose should be running the ECB.

It was good while it lasted. We at least had the foresight to establish something of a Sovereign Pollock Fund so, until the black helicopters start circling and Herr Schäuble comes a-knocking, the Furry Minions shall live high on the proceeds. But, like most catastrophes, it started simply: the appearance of being able to get something for nothing. This time however, and unlike the Euro, it didn’t involve creating a collusive lie from the outset, merely exploitation of unfashionable generosity or a mistake by a corporate body. We will recover, as our economy returns to its traditional base of trading in haggis skins and distilled deer urine. Our forced exit from the Pollock Zone will then help stabilise the economy and give our cats the beginnings of hope for a future that, once again, contains fish.