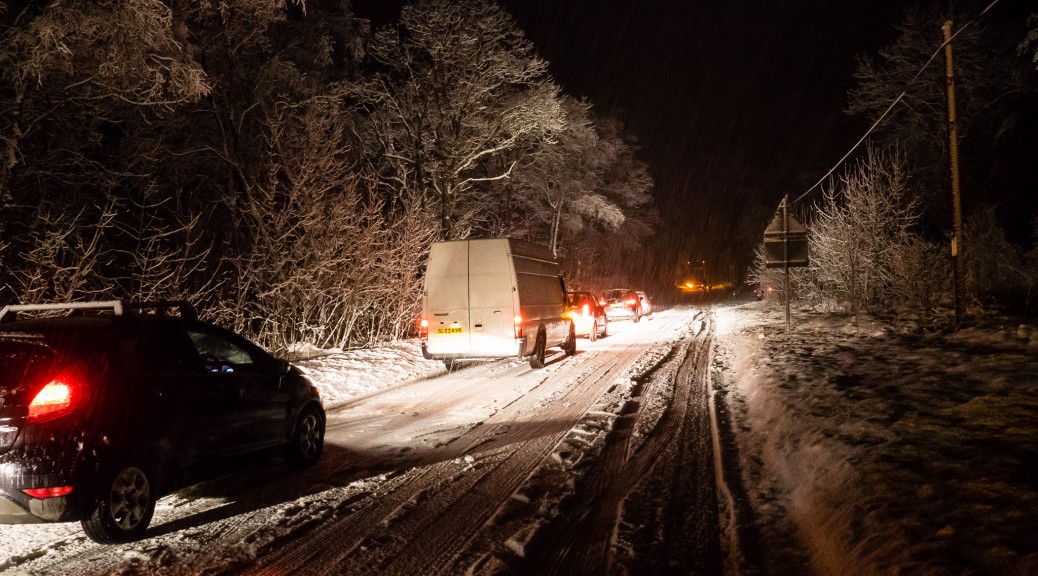 So, this evening we were heading home – conditions moderately crappy, but all was well, until we reached the Pass of Leny, where we joined the back of a long and unhappy queue. After half an hour of thumb-twiddling, a stroll to the front revealed that: one articulated lorry had got stuck on the rise to the blind ridge; the following lorry driver (see photo for registration number), rather than thinking, “He’s stuck, I’m driving a similar vehicle, so I’ll wait and see what happens”, thought, “it can’t happen to me” and went to overtake, on the rise to said blind brow. Of course, he a) slid into the vehicle he was overtaking b) got wedged between that and the roadside barrier and c) blocked the road completely. It was just luck that no-one went head-on into him.

One of the police at the scene approached me, “Can I help you, Sir?”. “Yes”, quoth I, “I’m thinking of decking the idiot who caused this”. “I wouldn’t recommend that, Sir”, came the laconic response. A short pause for dramatic effect, followed by, “You’d get cold standing in the queue…”. Top reply. Problem was that it was still snowing and about 90% of the vehicles in the queue weren’t going to be going anywhere, especially trying to start off in the snow on a hill. So they were waiting for the ploughs to go through several times and then for a gritter to clear the whole hill, which was going to take a while (some understatement there…). So another word with the nice Polis, along the lines of, “We’re on our way back from hospital, have four-wheel drive and winter tyres and we’d REALLY like to get home tonight” and he waved us right through. Dry wit AND intelligent decision-making, a Top Bloke.

By way of a little diversion, I then e-mailed Glasgow Car Movers, whose driver appears to have caused the whole stramash. This is how the exchange went (warning: may contain traces of sarcasm):

Me: “…to your driver of PN05 EJO last night who, by removing whatever brain cell(if any) he had operating, managed to block the entire A84 for several hours last night. According to the attending Police, he’d chosen to try to overtake an already stuck similar vehicle on the approach to a blind brow in the Pass of Leny when (a) there could easily have been someone coming the other way and (b) when it was blindingly bloody obvious that he was going to get stuck as well.It’s not that we locals don’t like to be entertained by the often inconvenient and occasionally fatal antics of passing numpties – on the contrary, we absolutely love spending hours on detours or freezing our butts off as we wait for the latest pillock to be towed out of the way. My, how we laugh merrily at their entertaining antics as they drag their knuckles along the tarmac, challenging our entire understanding of human evolution.Please. Do. Not. Do. This. Again.SincerelyRichard“Which led to this exchange with John Gorman of Glasgow Car Movers:Him: “Get a life .” – very constructive, from a guy whose driver had just interfered with the lives of a few hundred other people.Me: “I’ve got one thanks, and it’s a pretty good one, except when it’s briefly interrupted by lobotomised Neds. I will however publish your eloquent response and pass it on to the police and VOSA.Enjoy the dribbling…“Him: “Dear dick.Your welcome to come out from behind your little keyboard anytime you wish to meet our driver.”

Allowing for basic illiteracy (I’m assuming he’s not a mate of Lynne Truss), we’re now into implied threats. Nice one.Him: “Dear richard. you really must get a hobby? “Me: “I suddenly find I have a new one: making tossers’ lives difficult. And, congratulations, you’re the first contestant.“I’ll let his attitude speak for itself – would you want to be sharing the road with vehicles from a company like this?