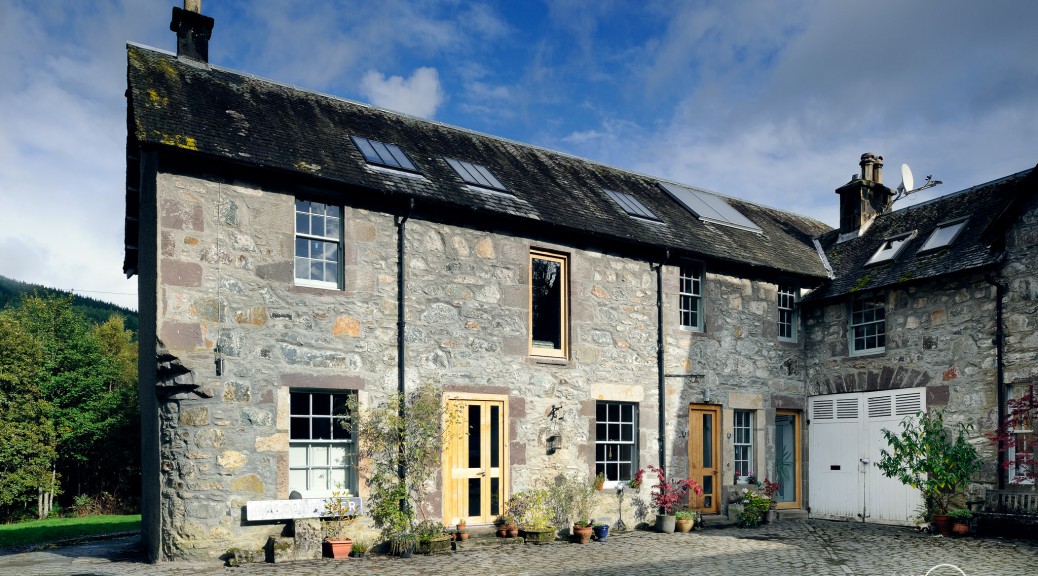 It’s taken us six years, but we’re there. Actually I’d say we’re three months from finishing and probably will be for several years, but all the basics are in place, remaining work being the painting of woodwork and one bedroom, the tiling of one of the bathrooms and the rectification of various minor-but-annoying balls-ups by the main contractor.

So we’ve eco-renovated and remodelled the farm to create for ourselves a thoroughly modern living and working space within the context of a sympathetic renovation of this beautiful listed building. In doing so, we have gone to great lengths to restore and reveal the original character and function of the building.

In doing so, we’ve fought the good fight against the lowest common denominators of officialdom and the disinterest of those who could and should have contributed (are you listening, Historic Scotland?). We’ve suffered considerably from the almost inconceivably low standards, incompetence and laziness of many British suppliers and contractors but we have found a few – too few – who genuinely know what they’re doing, deliver what they were asked to do and do so to a high quality.

We have been able to commission, as hoped, traditional crafts-based fittings and furnishings. We have combined traditional skills with ultra-modern networking and low-energy technologies to create what we find is an inspiring living and working environment.

We’ve also created a building with what is, for its age and status, a very low carbon footprint, entirely heated by renewable energy. Which can only be a good thing.

We have turned a six-bedroom, three bathroom property into one with three dedicated bedrooms and other multi-purpose rooms which can become bedrooms at need. A long, dank corridor and the three bedrooms that lead off it have become a open plan living hall with a 4.5m ceiling, a walk-through library and an en-suite study/bedroom. The attic now provides both habitable space and usable storage, the former galleried into both the library and living room and accessed via a feature staircase from the living room. New roof lights provide additional direct and ambient lighting to much of upstairs as well as providing effective air circulation in summer.

The existing living room has become a new master bedroom. The kitchen and stairwell have been opened up and combined into a single galleried cooking, dining and social space. What was a self-contained flat downstairs now forms en-suite guest accommodation and a working artist’s studio and music room, but can still be used as a self-contained unit should the need arise. What was a divided and largely unusable entrance hall is now a single space with room to store and dry boots and outdoor clothes. A small shower room off the hall has become our new utility room and the central node for the house networks. The old stable now houses our motley collection of bicycles and motorcycles and the tack room/coal store has become the plant room for the renewable energy systems.

Stronvar was originally a working building so we were trying to keep shapes and forms simple and uncluttered. Our overall aesthetic has been to use the forms, colours and textures of natural wood and stone to create an organic and warm feeling with simple repeated design elements inspired by the ethos and products of the original Arts and Crafts movement and pioneers like Charles Rennie Mackintosh – visits to Glasgow School of Art helped inform our designs. We were fortunate to find craftsmen who understood our thinking and were able to turn our designs into beautiful reality.

The whole house is warm, airy and, in our view and that of our visitors, inspirational. The quality of the house now matches that of its architecture and history, all of it in harmony with the stunningly beautiful surroundings of the National Park. Of course it cost far more than we ever anticipated, it took five years of blood, sweat and tears to deliver, but the whole now matches and exceeds the vision we had even before buying the place. To say that we’re very happy with it would be an understatement.

That’s a summary, but how did we get there? For more detail, read on…

2 thoughts on “There. Or thereabouts.”