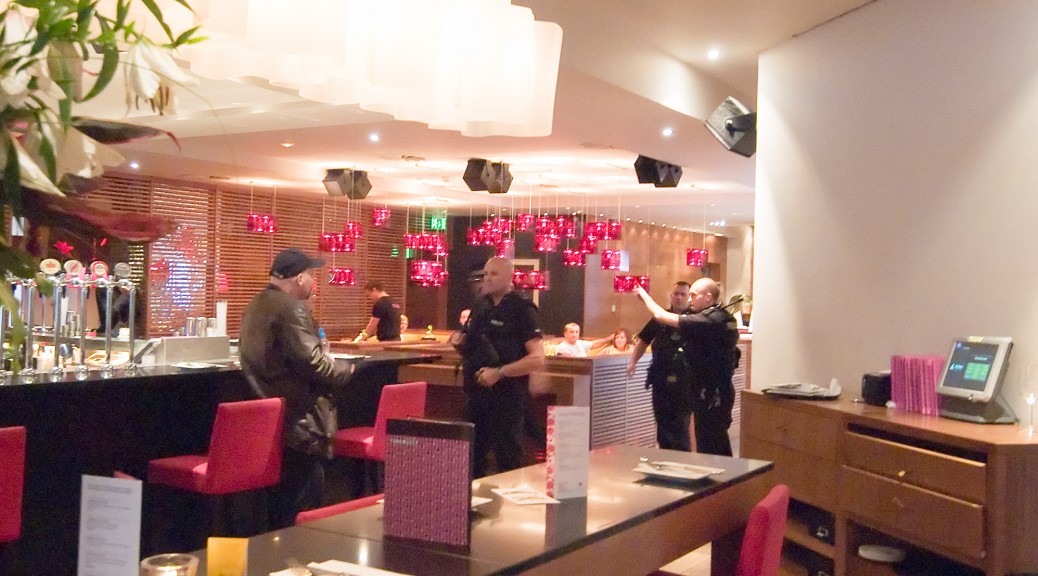 So I was in tropically soggy Festival Edinburgh this weekend for a bit of a schmooze, most particularly for our friend Martin’s stag weekend. As such weekends go, it was notably good-humoured and civilised, with the party ending up at the Pleasance for its late-night comedy show prior to the inevitable diaspora of cheerful drunks to their various borrowed flats, bought hotels and ad hoc burrows. So far, so good, and when the survivors reconvened on Sunday morning for a relaxed brunch and coat-of-the-canine in George Street’s Tiger Lily restaurant, all was relaxed and cheerful.

That was until The Infamous Incident of the Knife-Wielding Maniac (Dr Watson gets away with capitalising his cases so I don’t see why I shouldn’t). Our first awareness was of two police appearing in the restaurant and confronting a large and rather rancid-looking individual who’d been talking to the bar staff for some small while. It is worth pointing out here that, despite this being a tolerably upmarket restaurant in the heart of Edinburgh’s elegant New Town, merely being of dishevelled appearance is entirely insufficient to arouse suspicion – in fact, during the festival, it’s practically the de rigeur look of the determined Fringer. That said, there was a definite air of notquiterightness about this particular specimen.

We were slowly starting to grok all this, but were still entertaining the possibility of it being a Fringe stunt, when more police piled in through the side entrance and started to guide people out of the way. The by now object of supreme suspicion, having looked around wildly a few times (at which point we’d each independently and unanimously decided that the contra-rotating eyeballs were just possibly an indicator of a lack of inner peace) and twitched violently, then pulled out a large knife and began waving it at the police officers. They were, it’s safe to say, decidedly unimpressed by this and became imperative in their suggestions that he should put the knife down and be bloody prompt about doing so. The response was merely a lunge with the knife at the facing policemen.

This of course was when things moved from tableux to action: one policeman struck the knife-wielder’s wrist with his baton, with the the other three immediately moving in with what looked to the untrained eye to be an impressively co-ordinated flurry of baton strikes and a couple of blasts of CS spray. The end result was a yelling heap of many-layered humanity on the floor, with dark blue body armour being the predominant fashion zeitgeist, accompanied by the delicately eyeball-searing aroma of CS vapour (in its effect, not unlike Lynx aftershave) which of itself did a fine job of incentivising the final evacuation of the restaurant.

We stood around a while outside, waiting to retrieve coats, while assorted other police turned up (cue memories of Terminator 2: “The police are outside.” “How many?” “All of them…”) and the trussed perp was bundled into the back of a police Transit. In the meantime the police who’d taken part in the subdual were seen to be determinedly trying not to ricochet off solid objects in the neighbourhood while their adrenaline overloads and reddened eyes faded.

Decades of festival-going have meant that I’m largely inured to the many random acts of ludicrosity that pepper Edinburgh during August. This however I will grant as being more memorable than most, despite the non-Equity nature of the participants. The only pain was that we had just paid for lunch when evacuated, thus denying us the possibility of reverting to the student mindset and legging it. The silver lining however is that I’ve sold the pictures I took of the event (what else did you think I’d have been doing?) to The Scotsman, and that nicely covers lunch and a few other bits and pieces besides. The pictures will appear here just as soon as the 24 hour exclusivity period with the newspaper expires. My first piece of paid reportage – makes a change from my usual fare of landscapes, travel and more typical forms of wildlife.